Sex positive YA + romance with communication 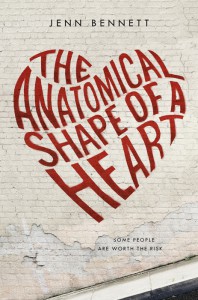 I've loved everything I've read by Jenn Bennett and she is on my autobuy/read list so this review might be slightly biased.... BUT THE BOOK WAS REALLY GOOD OKAY?

I went into this book expecting to fall in love and that's exactly what happened. NO SURPRISES THERE. Jenn writes the most amazing romances that won't fail to make you feel tingly on the inside and give you all the shipper feels. On top of that, she weaved in important issues and some diversity into the novel to make it an absolute winner. Her characters are complex and developed intricately so you cannot help but love them in spite of their imperfections.

The biggest issue I had with this book; however, was the slut-shaming. I will say that the main character kind of redeemed herself towards the end but there were some things she said and the people around her said that bothered me. The book aside from this one thing, is very sex positive (I *will* elaborate on that later) so I just wished the slut shamming didn't happen. I don't like it when characters are talked about in negative ways because of their sex lives. Let them live the way they WANT to.

Bex is an amazing character. I love how complex and imperfect she is. I love her struggle to find out who she is outside of her family. I love her determination. AND I LOVE HER WIT. I love watching her grow over the course of the book and become more comfortable within her own skin.

Jack is also equally amazing. He is also swoony. *melts into a puddle* No. I am not giving you more deets but I will let you know that his persistence is rather charming. *giggles*

The way sex is handled in this book is fucking amazing.It is the way sex should be handled not just in YA lit but also in adult lit. Jack and Bex sit down and actually talk about sex and what they like/don't like and then they ask each other to make sure they are okay with what is going to happen. Consent. *fist pumps* It's a magical thing that is so fucking important and hats off to Jenn for the way she handled it. *throws confetti in the air*

Which is why the romance works too. It's all about communication and we all know how important communication is. They aren't always amazing with their communication but the constant reminders that they are there for each other are fantastic and I love that. It's why you cannot help but ship them and that's what makes Jenn's romances some of the best I've ever read. She just knows. Perhaps magical powers? Who knows. WE WANT TO KNOW YOUR SECRETS, JENN.

This book also features other great relationships.Namely between Bex and her family and Jack and his sister. The only I would have liked to see more of would be friendships. Friendships are some of the most important relationships out there and I think it would have been nice to see Bex interact with some of her friends (who were not there for the summer but hey, skype calls are great too!)

The book also deals with mental illness in a way that makes me want to high five Jenn (maybe I just really want an excuse to high five her. Is that too much to ask for?)

Anywayyyy, I would 100% encourage people to add this book to their enormous TBRS. This book is a fantastic contemporary romance that won't fail to charm you and make you swoon.