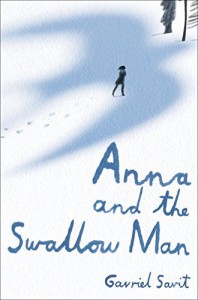 I don’t read a lot of historical fiction but I absolutely adore middle grade novels so when I heard about Anna and the Swallow Man, I knew I was going to have a lot of feels and would probably need a lot of tissues. The book; however, turned out to be not exactly what I expected. When I read the blurb, I thought that Anna and the Swallow Man would be right in the middle of the war instead of spending their time skirting its edges. Don’t get me wrong, you can tell that there is a war going on and the war definitely impacts their life, it’s just I thought their circumstances would be different.

Having said that, Anna and the Swallow Man is a beautiful, lyrical book and one I wouldn’t fail to recommend to someone who really wants to be sucker punched in their feels (because who doesn’t want that?)

Here are a bunch of reasons to read this book

1. Anna. She is one of the saddest main characters I’ve read in middle grade and Savrit works magic in the way he writes her. She is a very aware child but the way Savrit writes her constantly reminds readers that she IS a child no matter how smart she is. It’s why my heart constantly broke for her and her struggle.

2 Secondary Characters. The Swallow Man is a wonderfully complex character. He, at the beginning of the novel, is someone who comes off as a savior but as the novel progresses, we find out that there is a whole lot more to him. He isn’t a perfect character and there were parts during the middle of the book where I wanted the ground to swallow him whole (I am so clever) because he was really getting to me. By the end of the novel, I liked him as a character since there is SO much to him. Reb Hirschl one the other hand was my favorite character in the world. Okay perhaps not in the world but in this book, yes. He broke my heart a million times over and made me smile like no one else in the book.

3. The Journey. Or the journey to nowhere as it should more accurately be called. Throughout the entire book, Anna and the Swallow Man are walking to somewhere yet we don’t know where. The Swallow Man tells Anna that they are trying to find a bird that is almost extinct but a lot of the time, they just seem to go on and on in circle. Their journey is full of many hardships and even though they are never in the middle of the war, the war is never forgotten. It impacts them when they run out of food and slowly start to starve, it impacts them when they attempt to cross German borders, it impacts them when they come upon mass graves. Even though the story doesn’t seem to be about the war, it IS. Savrit weaves in the war into their journey and as the war rages on, we become more and more aware of the horrible affects the war has. The book spirals into darkness and starts to tear open our hearts. It loses its innocent charm and turns into something darker.

So hopefully I have convinced you to read this book… if not OOPS? I TRIED, OKAY. I did my best. I am going to go home and sleep now because emotions.