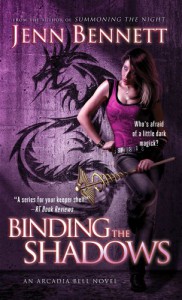 I only found the Arcadia Bell series this year so I didn’t have a particularly long wait to this one but it seemed like a painfully long wait to me anyway.

I spent a good deal of time this year exploring the Urban Fantasy genre, and its suffice to say that while there are some good books, a lot of them are so similar it’s like reading the same story again and again. This, however, wasn’t the case with the Arcadia Bell series which is now one of my favorites.

I think the strong point of this series isn’t the unique concept but the strong relationships between the characters and strong characters in general. They just make the book so much more fun to read but this book was a lot more serious than it was fun.

The book starts with Jupe’s grandmother and aunt coming into town and them not liking her but things get worse when Lon’s ex-wife comes to town. On top of that there is a drug going around that amplifies knacks, and Lon and Cady are put on the case.

Cady is a lot more sensitive in this one (we find out why later) and she is slightly insecure as well. It didn’t bother me as much as it would have had it been anyone else, but Cady is a strong character and everyone is allowed to have insecurities as long as they don’t become setbacks.

I’ll admit to thinking there wasn’t enough Jupe in this one. He was there, but the reason I love him is because he always lightens things up but there just weren’t a lot of funny/light things going on in this one.

I think out of the three books this one has the most interesting plot because this time around things are getting a lot more dangerous as more secrets about Cady are revealed.

The only thing I didn’t like (besides there not being enough Jupe), that I am sure everyone who has read the book will agree on, was that cliffhanger. At first I didn’t even know that that was all. I was sitting there trying to make sense of what had just happened and kept on re-reading the ending for some sort of clue. It just broke my heart once I wrapped my head around it.


Right now all I can think of is how I’ll survive the wait to the next book. It’s going to take a year to come out and with that cliffhanger… it’s not going to be easy. At all.