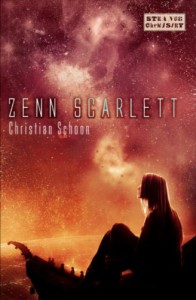 after reading
TELL ME THERE IS GOING TO BE A DAMN SEQUEL
TELL ME!

Review
The reason I decided to request Zenn Scarlett was (not because of the pretty cover) because it reminded me of another book I had read ages ago. I read this book back when I was in middle school and I absolutely adored it, the problem was I forgot what it was called and so for the past 5 years I’ve been trying to find it without any luck. Sometimes I wonder if I can call the school up and ask them to print out a list of all the books I ever checked out and send it to me, although that would be super awkward.

This is probably the second book I’ve read dealing with Earthern colonies on other planets (if I’ve read others, I cannot recall them so I apologize to you dear books for forgetting you).

I am very happy to say this book didn’t disappoint, of course I won’t say it was better than the book who’s title I forgot because that book is connected to my childhood and is hence more precious (insert psychological explanation here).

Zenn was a great main character, she lost her mom when she was fairly young and her father left her on her own. Due to this she created rules so as to keep herself from getting hurt again. But the thing is she knows that the rules will probably have a negative effect on her as well, she understands that. She also realizes (later on) that her rules are a defense mechanism, she lets in a hand full of people but other than that she doesn’t want to have to deal with anyone else but slowly she opens up to Liam. Zenn also has a great voice, it makes it very easy to relate to her. I’ve never wanted to be a vet in my life, doctors scare me in general yet I found myself wanting to be one while reading this book. Her passion about animals is admirable.

Liam is a rather interesting character, he has some of his own secrets but to see how his views about aliens change is rather exciting. He was never rude to the animals but his opinions about them weren’t so great because his father was killed by one.

Hamish is awesome. The best alien friend ever. Hamish is their sexton but the planet where he comes from has a hierarchy, because of this he asks permission for everything. Despite this he is a great listener and very understanding. He tends to be curious about humans and their behavior. Zenn is always telling him to not ask permission for every single thing and to think for himself. I LOVED seeing how his character developed throughout the book.

The plot to the book is well paced, at first it starts of slow as the author gives us insight into this world he has created. The world building is great and I actually have a very good idea about how everything would be like. One of my favorite things about it is that humans didn’t create colonies on other planets because the Earth was dying but out of curiosity (I am not sure about that but that’s what I believe). I hate it when people leave Earth because is messed up, why cannot we create colonies because we can? Why wait till the last moment? That sounds extremely bratty but that’s not my intention, what I mean is humans are obsessed with science, if other planets can support human life why would we not test that theory? It doesn’t make sense.

Anyways going on. As we go further into the book, the author starts feeding us more and more tid bits until finally we can see the plot unraveling. It’s almost like the climb to the top of a roller coaster, right before you go down.

This book ended on a cliff hanger and I am not sure if there is a sequel but there better be because otherwise, there are going to be plenty of angry fans.