Heart of Venom by Jennifer Estep 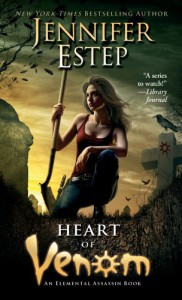 I am going to start off by saying that I skipped a lot of books in this series, in fact I’ve only read the first two. I did this (not because I was lazy) because I had heard a lot of things about how Owen becomes really annoying in the 7th book and I really did not want to have to go through that whole situation again. After reading this book though, I think it might be worth it to go back and read everything I missed.

Jennifer Estep just cannot disappoint me; whether it is her YA series or her Adult series. While her books aren’t perfect, they make for great comfort reads.

The last couple of books I’ve read weren’t exactly amazing (or if they were, I ended up being disappointed for one reason or the other) and it was so refreshing to read a book that I actually enjoyed.
What makes this series so good is Gin. She is such a strong female lead without going over the top. She has her weaknesses but instead of setting her back, they make her stronger and make her more appealing as a character.

I also love how Jennifer shapes her alter ego, the Spider. Spider is a ruthless assassin. She doesn’t think twice about killing anyone and I love how Jennifer maintains that attitude. Gin never regrets it, she doesn’t lose sleep over it. It’s part of who she is, she isn’t disgusted by it. She isn’t going to change any of it because it makes someone uncomfortable. More than that, she is true to herself.

All the secondary characters are strong as well; from Sophia to Owen. While we don’t see much of some of the other characters in this book, based on the first two I’ve read, I can definitely vouch for most of these characters.

I did miss the introduction to Bria’s character but from the glimpses I got of her during this book, I know she is a strong character. The only thing that didn’t work so well for me was the fact that Estep paired Finn and Bria together. I love Finn’s character but putting him in a real relationship steals some of the essence of his character, although I am really happy that this relationship didn’t turn him into a complete mushy gushy guy. He was the same old awesome Finn.

Moving on to the other relationship in this book, Owen and Gin’s. I also didn’t get to read the part about them getting together in the first place and then Owen screwing up (although I did read about the Owen screwing up part from other reviews). Let me just say that Owen did screw up real bad. Where I last left off (at the end of the 2nd book), he was going to try to prove to Gin that he was better than Donovan (which I personally don’t think he is) and he made the same mistake he did except his was worse. Before I say anything else about their relationship, I feel the need to talk a little bit about Donovan (since I didn’t get to talk about him before). I know a lot of people think Donovan was an asshole for the way he treated Gin but I really loved his character. He wasn’t an asshole, he was being true to himself. He couldn’t just change his beliefs over night because he was developing feelings for someone who did things that went against everything HE believed in. Isn’t that in a way like Gin? The same way she couldn’t stop being who she was to make Donovan feel better, he couldn’t change his opinions to make things work. I think in that way, the two are so well suited but that is also the reason why they cannot be together. Yes I was rooting for them. But coming back to the point, I love Owen as well. I didn’t think I would be able to, but I did. He is the kind of person you (usually) know will always be there for you and you can (usually) count on him. Also, I loved how he actually realized that he was being an ass and apologized. Plus I love how the author ‘redevelops’ their relationship over the course of the book.

The plot was again nothing over the top but I really enjoyed it. I was worried Estep would drag the whole thing out but am glad she didn’t. It just seemed like such a quick read. I was surprised when it was over.

I believe this was a great edition to the series and it makes me want to go back and read the rest. If you’re a fan of the series, READ IT. If you’re not, start from the beginning :P