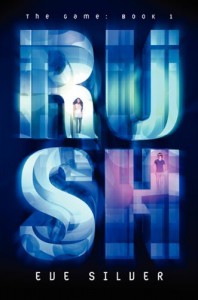 After I requested this book it took me a while to get around to it because I was kind of nervous about the whole ‘game’ concept. I am not a gamer so I wasn’t sure whether I would be able to enjoy this book or not but because of my obsession with the sci fic genre I finally picked it up (that and I kind of had to review this).

But because I couldn’t overcome some of my minor problems with the book, I ended up not enjoying huge chunks of it.

I am glad however that the ‘game’ part of the book was epic. I guess I should have never worried about that one because shooting evil aliens is always going to be cool (jk. No offense to aliens). Add to that the whole game like structure of this alternative reality. It was definitely something I could enjoy and this is coming from someone who despises gaming (I suck at it that’s why).

The relationships between her dad and her friends aren’t as well developed as I would have liked. There were some issues between her and her dad that were briefly looked at but no steps are taken. As for her friends, Carly is the only one who was focused on and frankly, I dislike her. She is a boy crazy girl, which I could have overlooked if there was more to her character. Carly fights with her best friend because of a guy and doesn’t even try to listen to the whole story. Hello woman since when do guys have the ability to separate best friends?

Miki is an interesting character, she has some issues and they do define her to a certain degree but really I rather like her. The little bit about her obsession with having control goes as far to her eating habits but I get it. Her mother died because of cancer she doesn’t want to have something like that dropped on her out of nowhere, she wants to be in charge of herself. One of the other great things about her is she always asks the right questions. Sometimes you’ll sit there wondering if she can read your mind.

However, I cannot declare her awesome. I am so tired of having my female lead fall for the asshole. What is it about assholes that calls out to them? Oh please. Don’t throw the tortured asshole cliché at me.

“He pulls emotions out of me that I’m not used to feeling”.

Uh huh. I don’t even know what to say to this. How can someone say that and not expect me to think that this is cheesy. She barely even knows the guy at this point.

Why cannot characters be upfront? Luka, who clearly has had shit happen to him, wasn’t an asshole. So don’t tell me it cannot be done. Layers are interesting in a character if the top layer isn’t asshole. I would have been a lot more sympathetic towards Jackson had he not been such an ass and said things like:

“I’m trying to stay away from you, I’m not a good guy Miki”

No. Don’t say that if you want me to like you. NOPE.

I guess two things I can appreciate about him is the fact that the author doesn’t focus on how hot this guy is and his determination.

For those wondering if there is a love triangle, there wasn’t one but maybe it might be possible in the future. Luka seems to be interested but he isn’t really given a shot. There are a couple of stare downs between Jackson and Luka which pissed me off because at this point neither have made a move on her so they don’t have a right to claim her, aside from the fact that she isn’t something you can claim or fight over. Yeah after that I wasn’t such a big fan of Luka either.

The “I Love Yous” came out of the blue (uninvited). I was really surprised. I was hoping for more development because I am not sure they even knew each other well enough to make those declarations.

Also a warning for those who detest cliff hangers, the ending isn’t pretty.

I really wish this book had focused more on the science fiction part of the book and developed it more because my favorite scenes where when they were fighting. Had the focus been less on the relationship/school drama and more on the pure awesomness of the world the author had created this book just might have been a 5 star deal.