Courage and Other Demons by Jill Daughtery 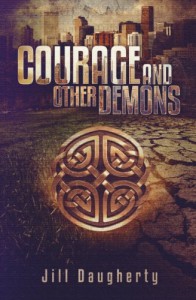 This review is a hard one to write because I have mixed feelings about this book, there were many times where I wanted to bang my head in annoyance but in the long run this book was enjoyable. It started off as a somewhat clichéd book but then again it did have its plus points.

I am not really that big on faeries but I do believe Daugherty did a rather good job with them in this one. For example faeries in this book aren't only Irish but from all around the world and not all are KNOWN as faeries because different cultures identify them differently.

The main character remains true to herself and admits to lying to herself. I think that’s one of the things I can appreciate a lot about her. She lets herself feel things (like for example placing her anger Simon) that may not be rational but then again with the kind of responsibility dumped on her she has a right to those feelings. In fact I would be surprised if she didn’t. She also asks the question many DON’T ask… WHY ME?; I am just a human, why out of all the Margret O’Neils do I have to be the one to put an end to this? Her decisions may not be the best but I like them because they seem genuine, if I were in the same position as her,  I would make similar decisions as well and would feel similar things.

I rather liked the best friend, although I do secretly hope she never finds out about the faeries, I don’t usually like it when best friends are dragged into such dilemmas, then the main character is stuck trying to protect every single person.

I liked Simon of course but I didn’t exactly find him swoon worthy, he seemed so perfect it was rather creepy, but I did like the relationship between the two. He understands why Maggie is acting so irrationally and puts up with it till a point, and then he decides to give her her space and leaves the choice to her about whether she can still be with him. Of course Maggie doesn’t exactly accept this gracefully but with everything else going on I don’t think she could even if she wanted to. I think they are a rather sweet couple, they may have some secrets but you know they lean on each other rather than try to hide the truth from each other. They are always there for each other and well I think I appreciate it what with most YA couples intent on keeping secrets and not trying to understand what the other is going through.

I also liked the writing style, it gave a lighter tone to the book but made the character seem a lot more relatable.

One of my favorite things about this book is the author’s take on the prophecy concept, she doesn’t make it seem random but tries to explain the concept of prophecies, because from what I understand, prophecies basically tell the future, they don’t pick who is going to do what but state what will happen. Everyone agrees that Maggie being the ‘chosen one’ is rather random but then again it’s the future being told, no one can do anything about it, had they not found Maggie, Maggie would have somehow found her way to fulfill the prophecy because that was what was predicted about her future.

One of the things that disappointed me however,  was how the author presented us with the Simon and Margret tale. It sounded more like a summary than an actual tale from a book of folklores. I wish it had been written more like an old fashioned tale (seeing that’s what it was), it would have made the thing seem more believable.

This book could be predictable from time to time, but in the long run it was a fun read. I look forward to reading the sequel.