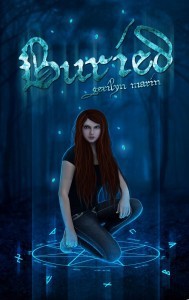 Buried is rather tough one for me to rate because even though I liked it there were some things that annoyed me so in the end I settled on a three.

The book is set in a small town where weird things tend to happen. The citizens know that their town isn’t normal but they don’t really dwell on the things that happen. For them it’s kind of normal and a lot of the times they tend to overlook the things happening because what else are they supposed to do? I’d call it a ghost town but it isn’t that exactly, it’s just creepy.

The plot deals with unearthing the secrets of this town. If I had known that before I started the book I would have been a lot more excited because I love secrets. It starts with the Addison family, there are no records of them ever living in town before but Grey has proof that they have, so is the town hiding something or is something being hidden from the town?

Despite this promising plot there were a couple of things that bothered me. Starting with the pretty people, again I hate it when everyone is pretty. I don’t understand why everyone must be pretty. It bothers me. Both our main characters are pretty and even though one of them is described as ‘old school’ pretty it counts. Grey is ‘effing’ hot (summing up the description of his hotness in the best way I can). Why is there so much focus on the looks? I don’t really care if they are pretty or not, if they annoy me the fact that they are pretty is just going to make it worse, and yes both Grey and Candence annoy me.

Wendi is her best friend yet all Candence really does is complain about her and look down on her, not that I like Wendi but they are best friends, I’d have liked to have seen more of a relationship between the two. The only role Wendi has here is the best friend crushing on the older brother. The older brother, who goes to college, has a crush on Wendi as well. Talk about ridiculous. Why would he have a crush on her? The only good quality about Wendi that has been mentioned is that she is extremely loyal.

One thing that bothers me personally was the fact that she asked why all boys were obsessed with Star Wars. It’s kind of offensive because I happen to be a fan and she makes it sound like Star Wars is a thing only guys like which isn’t true. This won’t bother most people though.

Grey is way too over protective. He tried to tell her a gazillion times to back off because it will keep her safe. I am sure she doesn’t want to die either and if she is okay with helping you out than leave her alone. It’s her decision to make not yours! She isn’t a damsel in distress. She happens to be smarter than you and you couldn’t have gotten anywhere without her, so please, stop.

Candence of course keeps secrets from Grey. If she had told him what was happening with her, some things could have been prevented. Now though, the damage has been done.

Despite all these things I am kind of excited for the sequel and even though the ending bothered me to no end, I’d like to see where things go from here.