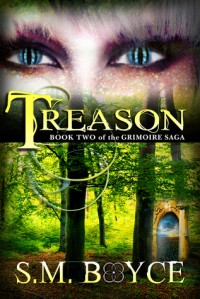 I requested this book earlier this year but it took me a while to get around to it, mostly because of my ADD and huge reading-list. When I did get around to it, I was disappointed. Treason just didn’t impress me as much as Lichgates did.

I am going to start off with our Stelian Prince. His real identity came out at the beginning of the book so that was somewhat of a relief. What I loved most about that however was the fact that instead of glooming around he actually decided to embrace his identity. Even though he isn’t completely comfortable with what he is, there is no point in hiding it, it was time for him to finally act like the heir he is. One of the other things I really liked was how he backed off when Kara said she didn’t want a relationship. She is capable of making her own decisions and should be treated like the ‘adult’ she is/ What really bothered me about Braedan however was how he was ready to do anything to protect Kara, at least Kara tried to think things through, he however would go head face into danger without considering other solutions just to protect Kara. She isn’t a little girl. She can take care of herself.

It was mostly Kara I had problems with. Some of her interactions with the Vagabound and later on another entity (that must not be named so as to avoid spoilers) just fell completely flat. The conversations that took place were so preachy, like the purpose of these interactions was to discuss philosophy or just to make Kara look smart, like she knew what the hell was going on. That didn’t sit well with me. Sometimes I also felt like she wasn’t taking her role as the vagabond seriously. She complained about the attention and kept on arguing with the first vagabond. While I am glad she didn’t obey him blindly and questioned what he had to say, it annoyed me when she couldn’t seem to grasp how big the role was. I mean she had a whole book to get used to the idea, it almost seemed like she was back to square one with all her whining. She also seems to be getting in the most messed up situations. She really should trust her instincts more. Although she always works her way out and doesn’t need Braedan to rescue her all the time.

My favorite character in the book was Deirdre. She is so fascinating. No one really knows her agenda. She manipulates EVERYONE. You cannot even be sure if she is a good or bad guy (well from Kara’s POV… she is a bad guy but for me as a reader, not so much).

I do hope we spend more time with her army in the next book.

The plot itself wasn’t that great either. The romance seemed to become the life of the book with all the dancing around and neither of them willing to give in to their feelings. The twist in the end was rather bothersome too but I am starting to get used to the idea. I just feel like there were too many rescues going on as well. Like what ACTUALLY happened in this book? It seemed more like a bridge towards the next book.

With all that said I should say that the world of Ourea continues to amaze me.  This wonderful world S.M. Boyce has built is enchanting and even with everything I didn’t like the world building is still great.

After that awesome epilogue (well I liked it :P) I really hope that I won’t be let down again when I read Heritage.