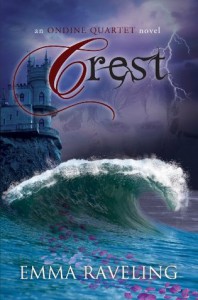 "But you're still a player, Kendra." He turned to face me again. “You remain the central character of this story and a narrative has built around you and those in your life."

We’ve come so far since the first book. I remember when I first picked it up, I wasn’t looking for much but I seem to be hooked and with each installment the series gets better and better.

Even with its similarities to Vampire Academy, the author manages to make the series unique and unlike the Covenant series, it didn’t take 3 books for that to happen, the author managed to give this series her own original spin right off the bat.

The main reason I didn’t give this book a four was because of the characters. They have improved a lot since the first book but they still have long ways to go.

Kendra has a lot of responsibilities, not only does she have to deal with being a Sondaleur but now she has soon-to be governor added to that mess. I was actually impressed with how she handled everything and even happier that she wasn’t fighting against her role as the sondaleur even as things got rough. She even pulled off her role as a soon to be governor. My main problem with her was her ‘mommy’ issues. She admits to having them but I really don’t enjoy watching a character run hot and cold. She has matured so much yet she cannot seem to act like a grown up when it comes to relationships. It almost contradicts everything else she does.

I don’t even know where to begin when it comes to Tristan. I am just so confused about him. I like him but at the same time I really just want to punch him in the face. He seems too soft to me. They call him the warrior prince but I don’t see the fierceness of a warrior in him, the strength a warrior has. Although I have to admit, I am pretty surprised by how much of an adult he was when it came to his relationship with Kendra. Yes I know he is an adult but I didn’t expect that kind of maturity from his end.

I cannot make up my mind about the whole situation with Julian. On one hand I am so glad that the author didn’t turn it into a love triangle but I am disappointed by the turn Julian’s character took in this one. He was just so sulky in this one. What happened to the fun Julian from the first two books? Sometimes it felt like the two weren’t even on the same team anymore. Julian seemed to be working against her so much. All because she refused him. I can understand what he did to a certain degree but that doesn’t mean I agree with it.

The author also continued to work her magic when it came to the world building. We FINALLY got to see the majestically Selkie Kingdom.

We also got to learn a more about Jourdain and The Shadow and even though their stories seemed like clichés they were also believable. They made sense.

The plot was well paced. It started off slow but when it took off I could hardly put the book down.

The ending though, it’s one of the best cliff hangers I’ve read (it’s a very odd thing to say I know). The author doesn’t end the book on a heartbreaking note, instead she leaves us with a crucial piece of information, which works in the best way possible to make us excited for the last book.

I really do hope that we don’t have to wait long for Breaker.