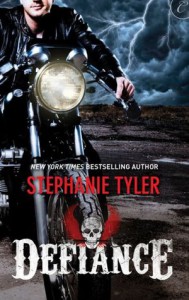 NA hasn’t been a very favorable ‘genre’ (I put the quotation marks because I know there has been some debate as to what classifies as a genre and what not) for me. Most of my experiences have been pretty bad. This book however piqued my interest. A post-apocalyptic book that focuses on a motorcycle club? Count me in.

I haven’t read a lot of motorcycle club books nor do I watch the famous “Sons of Anarchy”.  So my knowledge is next to nothing when it comes to the whole Motorcycle Club thing. Even with my inexperience it felt like the author did a pretty good job with it. The reasoning, how it all started, what it had become, everything. The world of Defiance seemed pretty real to me.

The main characters were actually WAIT FOR IT the best part of the book and I mean this in a good way. I was pleasantly surprised by the two, by their maturity. They are both pretty young but they act like adults, a lot of this can of course be contributed to their childhoods (is that a word?) but I just love how they aren’t just angst filled characters.

Tru was forced to run away from home at the age of 16. It was either stay or die at the hands of her father. She had finally had enough and so with the help of Caspar she ran away. She is returned by the rival MC beaten up three years later, after her father has died. Right off the bat things start going crazy with her return. She spent the past (year?) with the rival club so people are vary of her but since her father was well respected they don’t kick her out immediately, instead preparations are made for her mating with the president’s youngest son. To escape that horrid fate, she asks Caspar to be her mate. That was when I first started appreciating her; I always like a main character who can stand up for herself. Weak, Tru was not. It’s evident in all her actions, she is not afraid to stand up if it means backing up what she believes in.

Caspar was a pretty mysterious character. Half of the time you don’t even know his motifs. What is he planning inside that big brain of his? He’s pretty elusive. One of his best qualities is how passionate he is about the club. He wants to change things for the better but even he knows that everything cannot change, some things will remain the way they are.

Them together makes for a good romance. It isn’t an angst filled relationship.  It’s kind of clear even in the beginning that the two have strong feelings for each other but they need to work on trusting one another and so the unravel each other, learning the others secrets and being supportive.

I am not exactly sure about the plot though, the book itself was a quick read but the plot could have used some work. Half of the time I wasn’t even sure what the whole thing was about.

In the end, the book makes for a hell of a journey and was just what I needed after attempting to read a book that didn’t work so well for me.