a decent conclusion to the series 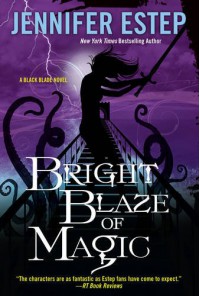 It seems like not that long ago when I was turning the last pages of the last book of Mythos Academy and here we are again, another series finished. More characters to say goodbye to. Sadness. Why yes, I am rambling… just a little bit.

So… even though I enjoyed the conclusion, I also think that the Black Blade series doesn’t hold it’s own against the Mythos Academy series. The last book does diverge itself a little bit more from Mythos Academy and doesn’t employ all the same tropes, but the conclusion also lacks an oomph in terms of the villain characterization.

What I mean by this is that the villain is cartoonishly evil.Victor has several trope-y villain monologues and reads more like a cardboard cutout than an actual character. There is no depth to him and I am still not sure what motivated Victor to want to take over all the families besides wanting all the money and control. Yes that is a thing real villains occasionally do but I also want a villain who I can sort of understand. Who isn’t just there as a deus ex machina.

The lack of characterization of the villain ended up bringing down the plot of the book for me. There seemed to be nothing substantial driving the plot forward. So while exciting things were happening, I really wasn’t as captivated by them since there seemed to be no real reason behind them. Sometimes the villain is just a big bad plot moving device but I have come to expect more from Estep.

The romance also fell short in this instalment. While I like the Devon and Lila as characters, their romance feels a little forced? I kept waiting to fall in love with them as a couple and it never happened. All of Estep’s previous series have had more time to develop the romance and I wonder if that plays a part. With only three books, this is the author's shortest series and I imagine there wasn't as much time to develop swoony slow burn romances which were possible in other series.

All that said, I did really enjoy being with these characters again. Lila is pretty kick ass, let’s be honest. I love how she takes control of situations and thinks everything through. She doesn’t halfass things.

There were also some awesome human-monster relationships in the last book that I loved. The monsters in this series are so adorable and I love the way Estep builds them into her world. We don’t get a lot of reasons about why they are there but their presence is essential to the novel and adds so much to the world this book is set in.

Human-human relationships (besides romance) are also exciting! I love Seleste and Lila’s relationship and Lila and Claudia’s relationship. They are, in a sense, mother figures for Lila since she lost her mother but at the same time, their interactions are less ‘parental’ and more familiar. I like that they don’t replace her mother but rather help to give her some guidance when Lila is in tough spots.

This series finale might not have been everything I wanted but it does conclude the series in a satisfying manner. I am happy for all the characters and hope they will have some snuggle time after all the troubles they have been through over the course of the past three books.

To recommend or not to recommend? I recommend the series because it is good brain candy and pretty darn enjoyable. Also, for those of you who haven’t started the series, it’ll be fun to binge read.