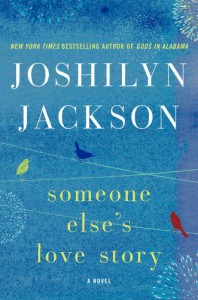 This was one of those rare books that I knew would be good before I even got into it. Even if I was surprised by some of the turns it took.

I mean a book that has an epigraph with the lines of my favorite poem (and one of the few I actually know); well let’s just say we were meant to be.

I have no idea where to start though.

I’ve re-read certain parts of this book multiple times, I’ve had more than a week to think about it yet I am completely lost when it comes to this book.

There is so much to say about this beautiful book and I have no idea how to put it into words.

This book starts off with Shandi telling us how she fell in love, at gun point. Then it goes back and tells us the story of how she got to the point (don’t worry the whole book isn’t set in the past). The story goes back and forth between Shandi and William’s past, showing us how this incident changed their life and is causing them to reevaluate some of the things they chose to avoid.

For Shandi it was finally accepting what had happened to her, finally accepting that her child wasn’t the wonderful miracle she had always tried to make herself believe but a result of something horrid. But she realized that that wouldn’t change the fact that she loved him. Shandi is a very refreshing character. She isn’t a kick ass female lead, she isn’t a mary sue. She is the grey in between. She is human. Just like the rest of us. Her best friend is her crutch but she isn’t spineless. She’s been through a lot yet she still manages to remain cheerful. She is confused as anyone would be at her age but she isn’t stupid. But being held by gunpoint made her realize she needs to stand up to the ghosts of her past, she needs to face the truth and so she enlists the help of her fellow survivor, William. She also uses this as an excuse to hang around him and try to win his heart as he won hers (oh don’t blame her, you would have done the same, hell I would have done the same).

William has Asperger’s, so he made for a really interesting character and it was fun reading things from his POV. For him the incident made him realize he may or may not need to finally face what happened to his wife and child. The heartbreaking incident he tried to push out of his mind and pretend never happened. He tried to forget the two things that really mattered to them, aside from his best friend. He is using Shandi as an excuse to avoid doing that but he slowly realizes he cannot do that. Honestly I think reading about him, as a male lead, was one of the best experiences I’ve had. He was such a fresh breath of air from all those broody and other tropes out there.

I cannot even pick a favorite character; even the secondary characters were great.

We didn’t get to see much of Walcott in the role of a best friend in the ‘present’ but in the ‘past’ he was the best best friend anyone could ask for. He helped Shandi through a hard time and took the burden off of her, he took care of things she couldn’t. He kept secrets until she was ready. They have a wonderful relationship. Let’s just say that.

The romance in this book is a mixture of different love stories. I am probably the only one who didn’t connect the title with the romance and shipped for William and Shandi until I realized it wouldn’t happen and not because William didn’t have any romantic feelings but because even I didn’t feel like Shandi would have been a suitable replacement for Bridget. What William and Bridget had had been beautiful, you cannot replace that. What Shandi and Walcott could have, we don’t know but maybe it’ll be even more beautiful. I think the story that stuck out most to me (and wasn’t really a focus of the book) was Shandi’s parents’ story. The realizations Shandi had about the two of them and how they would never really have a chance to fix things. It kind of breaks my heart.

The story the author tells is beautiful. She presents it wonderfully. It may seem slow but it’s worth it in the end.

Maybe I’ll pick up another book by the author, maybe I won’t, but that isn’t the point. The point is that this is a wonderful book about second chances, about giving life a second shot, about not giving up and maintaining that hope that lives in your soul and about facing your destiny head on. It’s a story everyone should read.

This review has also been posted on The Social Potato