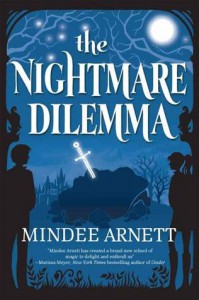 ***This review has also been posted on The Social PotatoA finished copy of the book was provided by the publisher in exchange for an honest review. This did not affect my opinion in any way.This was definitely one of my most awaited sequels for the year and when I got a copy in the mail, you would not believe how loud I screamed. When I finally got around to reading the book,I was so glad to not have been let down. I wouldn’t say it got better or worse, it was just the same level as awesome as The Nightmare Affair.The events of the previous book resulted in making The Will disappear so now all the kinds have unlimited access to their magic and can do whatever they wish to, this has resulted in a making the differences between the dark kinds and the light kinds more evident and there seems to be a lot more hostility between the two groups.Dusty remains her awesome self. She is such a likable female lead and her narration is definitely one of the plus points of the books. She has a tendency to make smart ass comments at inappropriate times because it’s her way of making things seem less serious, her coping mechanism. Dusty is so relateable though, she is afraid of things, she isn’t out to save the world but while she knows that she can use her powers to help, she will need time to think about things before jumping on board because wanting to help doesn’t automatically translate into your fear disappearing. One of the other things that makes her a great female lead is her ability to consider other possibilities and give people the benefit of doubt. Her vulnerabilities make her shine though, they show that she, in spite of the fact is a nightmare, is still human(????). She is still hurting over the events of the previous book and they have resulted in her having trust issues. She makes mistakes and is not perfect, in fact, even though her magic is powerful, she doesn’t have great control over it.One of the major problems I initially had in this book was Selene and Eli’s behavior. Eli was running hot and cold. Which is not helpful. He wasn’t leading her on necessarily but he pulled the ‘we cannot be together’ stuff and that bothered me but you could really see how much he wanted to be with her, he didn’t try to hide that once they actually sat down and discussed their feelings but he remained cryptic about the reasons as to why they couldn’t be together until the end. Selene was keeping secrets for a large part of the book as well but as soon as I found out what they were, it was easy to forgive her because it was something personal to her, and while she and Dusty are best friends, Selene wasn’t ready to tell her what was going on and that is understandable.With that said though, I love how the author chooses to portray Eli, he is gorgeous and gets a lot of attention from people but at the same time, there are plenty of people who don’t like him. Just because he is gorgeous doesn’t automatically translate to everyone liking him. People still give him a hard time over who he is and well, he isn’t perfect either. It really helps make Eli’s character down to Earth and makes him relateable as well because if you’ve navigated through the crowds of high school, you know what a mean bunch they can be sometimes.Another notable character was, PAUL. I remember liking him in the first book and I liked him in this one too. I absolutely loved how Mindee tried to redeem him by not showing him as someone who was innocent but at someone who genuinely regretted what he had done. It didn’t change things, everyone was still vary of him but you could tell he regretted losing Dusty’s trust in him and would take it back if he could.With that said though, there wasn’t a love triangle. It’s quite clear where Dusty’s affections lay. She might have felt something for Paul in the previous book but he killed what they could have had or perhaps they might have never gotten that far seeing that Dusty had always had feelings for Eli. I just hope that we get to see more of Eli and Dusty's relationship in the third (and if everything works out, not the last) book.

“Can we save the girl moment for later? Like after we save the world? We’re kind of in a hurry here.”

The plot is well paced and while the book does seem slow at points but like the previous book, it has a well written showdown that will keep you at the edge of your seat.It was exhilarating to the point where I was rocking back and forth trying to read at breakneck speed just to see how things would work out.I was actually glad to see I hadn’t been able to guess who had been helping from the inside but hey, at least I knew who hadn’t been.In the end though, this book was just as fun as its predecessor. I laughed, I flailed and I fangirled at the Star Wars references. With its fun narration, intriguing world and an interesting plot, this book was a winner and I cannot wait to get my hands on the third book in the series.If you haven’t read the first book, stop, drop and (roll) read it!